From The University of Vermont

Despite New Year’s resolutions to eat better and lose weight, people buy the greatest amount of food and calories after the holidays, finds a study led by a University of Vermont researcher.

The study, published by PLOS ONE, finds consumer spending on food increases by 15 percent over the holiday season (Thanksgiving to New Year), with most of the increase attributed to higher levels of junk food.

But shoppers buy the greatest amount of food after New Year – the equivalent of a nine percent increase in calories above holiday levels, says Prof. Lizzy Pope of the University of Vermont, who led the study as a post-doctoral researcher at Cornell University’s Food and Brand Lab.

“People start the New Year with good intentions to eat better,” says Pope, who recently joined UVM’s Dept. of Nutrition and Food Science. “They do pick out more healthy items, but they also keep buying higher levels of less-healthy holiday favorites. So their grocery baskets contain more calories than any other time of year we tracked.”

The findings are surprising given the holidays’ reputation for overeating – and suggest that people need better strategies for shopping under the sway of “res-illusions,” the research team says.

The researchers recommend that consumers use written grocery lists to deter impulsive junk food purchases; substitute as much junk food as possible with fresh produce and nutrient-rich foods, and split grocery baskets visually to ensure nutritious foods represent at least half of your purchases.

“We wanted to see how New Year’s resolutions and the end of the holiday season impact grocery shopping habits – how much food people buy, and how many calories the foods contain,” says co-author David Just, Cornell University.

More than 200 households in New York State were recruited to participate in the seven-month study of grocery store spending behaviors, from July 2010 to March 2011.

To identify shopping patterns, researchers split the data into three periods: July to Thanksgiving represented participants’ baseline spending (how much the average shopper regularly spends per week on groceries), Thanksgiving to New Year’s was considered the holiday season, and New Year’s to March the post-holiday period.

Foods were categorized as healthy or less healthy based on a nutritional rating system used at participating grocery stores.

“Despite New Year’s resolutions to eat healthier, people tend to hang on to those unhealthy holiday favorites and keep buying them in the New Year,” says co-author Drew Hanks, The Ohio State University, who worked on the study as a post-doctoral researcher at Cornell.

“Based on these findings,” Hanks adds, “we recommend that instead of just adding healthy foods to your cart, people substitute less healthy foods for fresh produce and other nutrient rich foods. The calories will add up slower and you’ll be more likely to meet your resolutions and shed those unwanted pounds.”

Helping Your Client Persevere in the Face of Learning Differences

23 Nov
Helping Your Young Client Persevere in the Face of Learning Difficulties
Learn More About This Course: https://www.pdresources.org/course/index/6/1210/Helping-Your-Young-Client-Persevere-in-the-Face-of-Learning-Differences
via: www.youtube.com 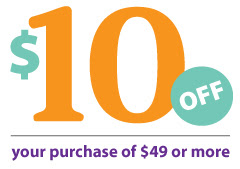 Today is the last day to enjoy $10 OFF your next online CE purchase of $49 or more.

Apply a coupon at checkout for even greater savings!

No coupon? No problem! Click here to complete a quick survey and get a 20% off coupon. Sale ends @ midnighttonight. Offer valid on future orders only.

Click here to view all CE courses for your profession.

Be Sure to Check Back on Friday for Black Friday Savings!

Professional Development Resources is a nonprofit educational corporation 501(c)(3) organized in 1992. Our purpose is to provide high quality online continuing education (CE) courses on topics relevant to members of the healthcare professions we serve. We strive to keep our carbon footprint small by being completely paperless, allowing telecommuting, recycling, using energy-efficient lights and powering off electronics when not in use. We provide online CE courses to allow our colleagues to earn credits from the comfort of their own home or office so we can all be as green as possible (no paper, no shipping or handling, no travel expenses, etc.). Sustainability isn’t part of our work – it’s a guiding influence for all of our work.

Earn CE Wherever YOU Love to Be.